Celebrating her centennial this year, Forward Baptist Church in Toronto has had a succession of remarkable pastors. Consider her second pastor, Walter Hughes, who was called to the church in December of 1924. A veteran of what was then called the Great War and a graduate of McMaster University, he was a natural-born leader.

When he came to the church, for example, 15 or so came to the mid-week prayer meeting. Ten years later, around 150 gathered for prayer every week, and some 350 had confessed Christ in the waters of baptism under his ministry. It was later remembered that:

The pastor has through the years expounded the Scriptures faithfully, in church and out of church, in the sick chambers of the members and adherents, and has preached the Gospel clearly at funerals. He has emphasized the substitutionary death of the Saviour and his physical resurrection for our justification, constantly declaring the efficacy of the blood of Jesus Christ, God’s Son, shed on Calvary to cleanse from all sin and empower for service.

Such a faithful ministry prepared the church members to be both defenders of the faith (i.e. against liberal theology), and light and salt to the world (i.e. mission). Happily, several of his sermons have been published, and readers today can have a taste of his preaching ministry almost a century ago.

For instance, in a sermon preached on 2 Timothy 4:2, which was entitled The Need of the Hour, Hughes declared:

The need of the hour is to “Preach the Word.” No matter where we look we see church spires piercing the sky. As we walk the streets here and there we see the reflection of stained glass windows. Was there ever a period in the world’s history when there were so many churches and preachers? There are a great many sermons preached throughout the world every Lord’s Day, and yet such a lack of the unadulterated Word of God. Our churches are suffering from “sermonitus.” People are being fed pastry instead of bread. If the Church of God would recover the flush of health known in the Early Church, and pulsate again with the fresh life of Pentecost, the Word of God must be faithfully proclaimed.

For Hughes, revival and a prosperous ministry were rooted in the faithful preaching of the Word of God.

As a pastor “determines that by the grace of God he will proclaim the pure word of God, he enlarges, not narrows, the scope and power of his ministry … All the power of God is behind him.” Hughes saw the pulpit as his ministerial priority, as it is there that God the Holy Spirit attracts and transforms people by the Word of God. Furthermore, to preach the Word is to preach orthodoxy. He was convinced, he said, that

in these days there is great need for orthodoxy in our pulpits, but we need orthodoxy plus Spiritual power. We need orthodoxy on fire not on ice. We need hot houses, not ice houses … We need the truth proclaimed, energized by the irresistible power of the Holy Ghost himself.

The consequences of faithfully preach the Word of God were threefold: Christ will be magnified; sin will not be minimized; and saints will be edified. 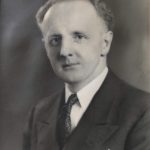 For Hughes, Christian spirituality is Christocentric, as he stated on one occasion: “From Genesis to Revelation, through poetry, prophecy, doctrine and precept can be seen the clear red line that leads to Christ and His Cross.” There is no spiritual power if the risen King of the Church, the Lord Jesus Christ, is not proclaimed in all of his beauty and power. Hughes would have fully agreed with the great nineteenth-century Baptist preacher Charles Haddon Spurgeon when the latter said:

If we do not make the Lord Jesus glorious; if we do not lift him high in the esteem of men, if we do not labour to make him King of kings, and Lord of lords; we shall not have the Holy Spirit with us. Vain will be rhetoric, music, architecture, energy, and social status: if our one design be not to magnify the Lord Jesus, we shall work alone and work in vain.

Hughes was thus convinced that: “We will have Christ-loving, Christ-serving people filling the pews of every church where the preacher obeys the admonition ‘Preach the Word’.” It was such preaching that made Forward Baptist Church a powerhouse for the Gospel in the east end of Toronto.