After practicing the habits of The Common Rule for over a year, I can confidently report that I am a failure; I have been formed by failure though, and I’m no longer the same. The Common Rule: Habits of Purpose for an Age of Distraction by Justin Whitmel Earley is a book about building spiritual habits. At bottom, however, it’s a book about learning to live a life that’s loving and life-giving, one failure at a time.

Humans are limited. We are not omniscient or omnipresent and trying to live as if this were untrue crushes people. By holding to a misleading doctrine of unlimited freedom, “we get so decision-fatigued that we’re unable to choose anything well …. we’re extremely susceptible to let other people—from manipulative bosses to invisible smartphone programmers—make our decisions for us.” The pursuit of unlimited freedom devolves into a kind of slavery.

The Common Rule is an old monastic “Rule of Life” updated for the smart-device age. Augustine and Benedict “saw habits as the gears by which to direct life toward the purpose of love.” Whitmel Earley explains how the Latin word for rule here refers to a trellis in a garden; it gives order to growth, preventing the natural tendency of a vine (and people) to twist and decay. The Common Rule seeks to “pattern communal life in the direction of purpose and love instead of chaos and decay.” 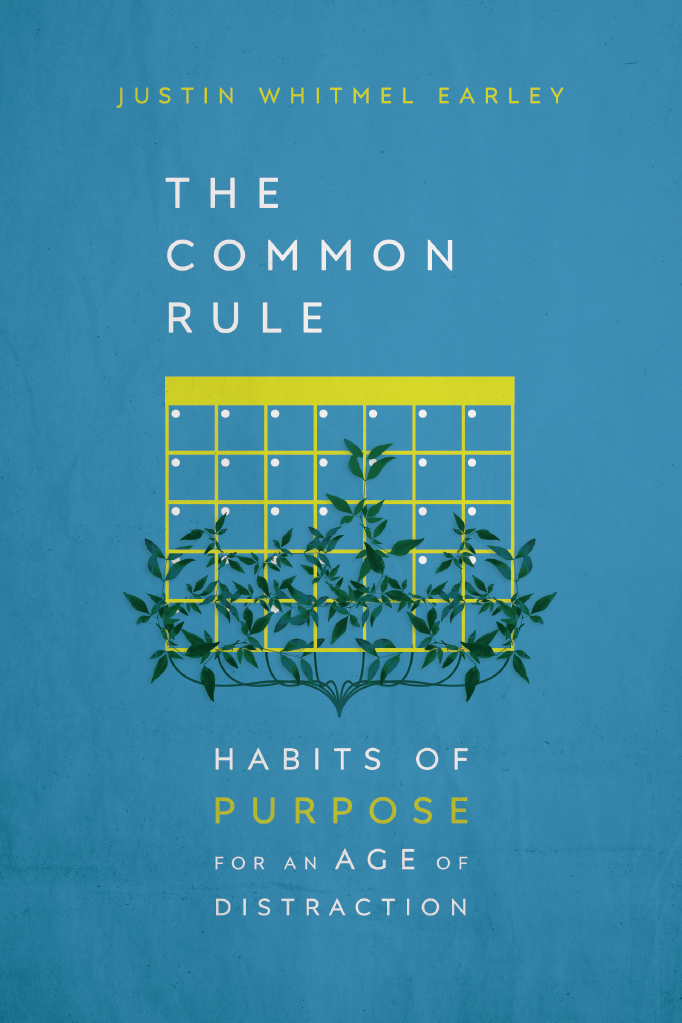 The Common Rule Habits of Purpose for an Age of Distraction

The Common Rule Habits of Purpose for an Age of Distraction

Ok, love and purpose over chaos and decay, that sounds great. How does it work, though?

A collection of daily and weekly habits on four different axes are meant to provide a trellis for loving God and neighbour. The idea is to embrace good things (rest, friendship, etc.) and resist bad things (distraction, ingratitude) through the cultivation of habits.

The final habit is the habit of failure and becoming comfortable with it. I needed this final reminder from the epilogue:

I don’t think I would have continued investing in habits of love and purpose after my experiment with it for Lent in 2018. Why? Because I failed so spectacularly at keeping the habits. But I failed forward, recognizing the good things growing out of my poor practice. I held fast to the habits that came more easily and adjusted some that proved more difficult for me to keep. I built a rule for my life while remaining true to the purpose of any Rule of Life: the love of God and neighbour.

I still fail frequently, but now failure is the exception that proves the rule. The background of my life has been redefined by reflection and contemplation instead of anxiety and distraction. Ordering life around a liturgy of love and purpose guards against counter-formation by the invisible rituals of consumerism, intellectualism and individualism.

Most helpful to me has been the practice of daily prayer, assisted by a prayer book, and curating my screen entertainment to 4 hours per week. Limiting my passive screen-time forces me to think about what else I could be doing and has helped redirect my habits of distraction back towards relationships and work.

I’ve never been more aware of my weaknesses than when freelancing, completely free to order my days. But the Common Rule isn’t just for underemployed millennials. Whitmel Earley is a corporate lawyer with a hectic schedule and is frank about what it takes to make a rule of life work in different contexts.

The book contains helpful diagrams like the one above, breakdowns of and possible implementations of each habit, and useful resources at the end of the book. It’s clear and well-organized and, perhaps most helpfully, expounds the value of each practice.

After a short introduction on the idea of cultivating freedom through limitation, the chapters explore how each of the daily and weekly habits helps us embrace and resist our inclinations, for the love of God and neighbour.

Habits of Love and Purpose

Consider this: I live in a city, where it’s difficult to build relationships with neighbours. So, if I want to love my neighbours I need to do more than _know_ I want to love my neighbours—I must demonstrate love. A habit of love looks like taking an interest in my neighbour’s garden after observing his regular care for his flowers. It’s baking two loaves instead of one because I discovered he loves fresh bread while making a habit of baking more bread than my wife and I could eat alone.

In You Are What You Love, another great book on habit, James K.A. Smith says, “We learn to love […] not primarily by acquiring information about what we should love but rather through practices that form the habits of how we love.” Beyond confessing belief, The Common Rule offers a handbook for rehearsing the themes of the gospel Christians profess. Knowing the two greatest commandments is one thing; actively loving God and our neighbours as ourselves is another thing entirely.

Whether ordering days around communion with the God who loves us or committing to more human rhythms of family and friendship, the habits of The Common Rule remind us of who we are. Sinners who nevertheless fail forward, falling into the grace of a God who made us creatures of habit.

Matthew Civico is a writer and ESL teacher from Montreal. He is married to Maria-Josée and they serve together at Église du Plateau Mont-Royal. Matt writes for Area of Effect magazine and you can follow him on twitter or his blog.