The great pioneer hymn-writer of the eighteenth century is undoubtedly Isaac Watts (1674–1748). During his life, Watts penned over 600 hymns, and through them has powerfully shaped the way English-speaking Evangelicals worship God—even today. 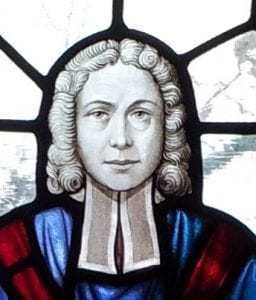 Watts was born to Christian parents in Southampton, England, on July 17, 1674. His father, who was also named Isaac, was a prosperous clothier as well as being a schoolmaster. A deacon in the local Congregationalist church, later known as Above Bar Congregational Church, the elder Watts suffered imprisonment at least twice for refusing to give up worship with this church. From 1660 to 1688 the Congregationalists, along with other groups outside of the Church of England, found themselves in the fierce fire of persecution, when a series of laws were passed which made it illegal to worship in any other setting but that of the Church of England. Of Watts’ mother, Sarah Taunton, we know little beyond the fact that she was of French Huguenot descent and after Isaac’s birth would nurse him while visiting her husband in prison.

The younger Isaac Watts experienced what he later described as “considerable convictions of sin” when he was fourteen. Happily, they issued in a sound conversion in 1689. The following year he went to London to spend four years studying in a theological seminary. After graduation in

he went back to live with his parents in Southampton for two years or so. Apparently, it was during this time in Southampton that he began to write hymns.

In October of 1696 Watts took a position as the tutor of the household of a wealthy Nonconformist by the name of John Hartopp (d.1722), one of the most eminent English Congregationalists during that era. Watts preached his first sermon in 1698 and four years later was called to be the pastor of what was the most influential and wealthiest Congregationalist church in London, Mark Lane Congregational Church, which he served for the rest of his life.

A serious illness in 1712 brought Watts to the home of Sir Thomas and Lady Mary Abney, at Theobalds, near Cheshunt, Hertfordshire. Watts had intended on staying only until he recovered his health, but he ended up remaining with this family till his death thirty-six years later, tutoring the children and pastoring his nearby church when he was physically able. We owe the Abneys a deep debt for supporting Watts in this way, for without their help who knows if Watts would have been able to write as he did.

An assistant minister, Samuel Price, was appointed early on in Watts’ pastorate, enabling Watts to give significant amounts of time to study and writing when he was not ill. Watts never married. After a proposal of marriage was turned down by Elizabeth Singer (d.1737), also an accomplished poet, he never again seriously contemplated the married estate.

Watts’ literary activity up until around 1720 was primarily in the realm of poetry. By way of contrast, during his final twenty-eight years Watts almost exclusively devoted himself to writing prose. According to reliable tradition, his first incentive to write hymns came when he complained to his father of the general poverty of the psalmody in their Southampton church. His father’s response was a challenge to his son to do better. As history attests Watts did indeed do better, so much so that he is often called “the Father of English hymnody.”

In 1707 Watts published his first collection of hymns, entitled Hymns and Spiritual Songs, one of the earliest English hymnals. It was in this collection that such great hymns as “When I Survey the Wondrous Cross” first appeared. Psalms of David Imitated in the Language of the New Testament, a recasting of the psalms in the light of the New Testament for the purpose of public worship, came in 1719. In Watts’ words, in this particular book he chose not “to express the ancient Sense and Meaning of David, but have rather exprest [sic] myself as I may suppose David would have done, had he lived in the Days of Christianity.” Good examples of such “Christian paraphrases” of the Psalms would include “O God, Our Help in Ages Past,” based on Psalm 90 and “Jesus Shall Reign,” drawn from Psalm 72.

A small idea of the impact of Watts can be found in a letter written to him by a certain George Thomson (1698–1782), the Anglican vicar of St. Gennys, a windswept village in North Cornwall perched atop cliffs overlooking the Atlantic. Writing to Watts in 1736, Thomson said:

“Poet, Divine, Saint, the delight, the guide the wonder of the virtuous world; permit, Reverend Sir, a stranger unknown, and likely to be for ever unknown, to desire one blessing from you in a private way. ’Tis this, that when you approach the Throne of Grace, and lift up holy hands, when you get closest to the Mercy-seat, and wrestle mightily for the peace of Jerusalem, you would breathe one petition for my soul’s health. In return I promise you a share for life in my unworthy prayers, who honour you as a father and a brother (though differently ordered) and conclude myself,

It may well have been something of a surprise to Watts to have received this letter of adulation from an Anglican minister, given the way that many in the state church of England regarded Dissenters like Watts. Thomson’s remark about his being “differently ordered” reflects this ecclesial difference between writer and recipient. As such, the effusive, and by our standards far too flowery, praise that Thomson lavishes on Watts is particularly noteworthy. In fact, Thomson confesses, Watts’ hymns were the medium by which God made him a “father” and mentor in the Christian life for the Anglican vicar.

Nor was Thomson alone in this view of Watts. Despite Watts’ church connections, pious Anglicans like Thomson deeply appreciated his writings, in particular his verse and hymns. Indeed, down to the present day there have been multitudes from widely different denominational backgrounds who have regarded Watts’ hymns in a similar way as Thomson.

May Watts, though his hymnody, long be a mentor to our Evangelical churches!