Helped by the article? Then support the work of TGC Canada!

Olaudah Equiano is a name of lasting significance in secular historical discussions, English literary circles, and among students of evangelical church history. Yet, his legacy is not nearly as widely known to the Church at large, certainly not to the degree of figures such as Jonathan Edwards or John Newton.

This is truly lamentable.

Stolen as a boy from the Kingdom of Benin, Equiano was taken to the slave markets in Barbados, and eventually bought by a ship’s captain in Virginia. After amazing and terrifying travels throughout the Atlantic world, he ultimately landed in England where he became a leading evangelical voice of the abolition movement in the British Empire.

Although much of the discussion of Equiano’s autobiography and remarkable journey has, justifiably, focused on his identity and work as a formerly-enslaved black abolitionist, Equiano’s life as an evangelist also deserves a spotlight.

Why Equiano’s Memoir is Worth (Re)discovering

Equiano’s life is nothing short of fascinating. It is so full of unique and dramatic experiences that it is hard to believe all belong to a single man. But that they do, and you can read all about them in Equiano’s appropriately named autobiography, The Interesting Narrative of the Life of Olaudah Equiano. This memoir is worth (re)discovering for a variety of reasons.

Firstly, from a historical perspective, it offers the firsthand account of an enslaved African, then freeman, traveling and experiencing the world of the eighteenth century.

Secondly, as a work of English literature, the account is seminal as it is one of the first “slave narratives” both written by an educated African and widely read in its day as an abolitionist treatise. 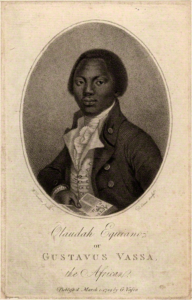 Most importantly, for Christians, this work ought to be celebrated as a profound testimony of God’s grace. Explicitly woven into Equiano’s retelling, and plainly informing the author’s interpretation of events, readers will recognize and be struck by a robust and thoroughly articulated evangelical faith at the core of the narrative.

We encounter Equiano’s zeal for the gospel and his intense desire to proclaim the truth of the Christian religion throughout The Interesting Narrative. Indeed, this passion is often what shapes his language when condemning the wickedness of slavery and other related social injustices. Beyond this, however, there are also times when Equiano tells us of directly engaging in and persevering through evangelistic ministry.

In chapter 11, as Equiano describes his adventure with a friend to Jamaica and the Mosquito coast (present-day Nicaragua and Honduras), he speaks of his “[hope] to be the instrument, under God, of bringing some poor sinner to my well beloved master, Jesus Christ.” As earlier explained, Equiano only agreed to join his friend on this journey because he knew “that the harvest was fully ripe in those parts.” Readers of Scripture will recognize the language of Luke 10:2, and Equiano’s clear missional excitement.

It is during this trip that Equiano encounters a group of “Mosquito Indians” (i.e. the Miskito people of Central America). Among this group of Miskito is an “Indian Prince”, the son of a great Miskito chieftain. During their 11 days of travel together, Equiano writes: “I took all the pains that I could to instruct the Indian prince in the doctrines of Christianity, of which he was entirely ignorant; and, to my great joy, he was quite attentive, and received with gladness the truths that the Lord enabled me to set forth to him.” As part of his evangelistic efforts, Equiano would teach the Miskito prince English letters, read to him from Fox’s Book of Martyrs, and after some time, the prince would actively seek to join Equiano in prayer.

Despite this astonishing progress, Equiano goes on to painfully share that Satan, in the end, “got the upper hand.” White men aboard the ship, whom Equiano describes as true sons of Belial, teased and mocked the prince so much that he walked away from his Christian study and would no longer entertain Equiano’s gospel efforts.

After a few further encounters, Equiano details one of his final conversations with the prince: “At last he asked me, ‘How comes it that all the white men on board who can read and write, and observe the sun, and know all things, yet swear, lie, and get drunk, only excepting yourself?’ I answered him, the reason was, that they did not fear God; and that if any one of them died so they could not go to, or be happy with God. He replied, that if these persons went to hell he would go to hell too.”

What We Can Learn from Equiano

Though Equiano has more to say about his relationship with the prince, there is not a happy ending to this evangelistic encounter. Yet, from this sad narrative, there remains much that Christians today can appreciate, learn, and apply:

Firstly, Christians reading this today, ought to simply appreciate the characters in this story. Equiano, the man stolen from Africa as a slave, is the devout, evangelical Christian missionary. His, initially receptive, missional subject is an indigenous Central American; a youth genuinely excited to not only hear the gospel but to study Christian history and learn how to pray. The antagonists, the ones who got in the way of this Christian evangelism, were the white men. These men were quick to mock Equiano’s evangelism and the scriptural truths that the indigenous youth was readily accepting.

If nothing else, readers should walk away from this story appreciating how it shatters perceptions that Christianity, in the context of the eighteenth century Atlantic world, was exclusively a tool used by white slavers to oppress both enslaved Africans and indigenous Americans.

Secondly, we ought to take note of Equiano’s thought processes and evangelistic methods. Equiano sincerely prayed for missional opportunities, and, in due time, they presented themselves. On the topic of methods, as Equiano shared the gospel, he felt it necessary to teach literacy skills so that his subject might personally engage with the Scriptures and other Christian materials.

Further, part of Equiano’s approach was to make use of historical and visual resources, namely Fox’s Book of Martyrs, and especially the cuts (i.e. images) which were printed in the book.

Thirdly, Evangelicals encountering this story should find encouragement in Equiano’s example. In an age where both his ethnicity and faith would make him an outlier (at best), Equiano boldly sought to share the gospel of Jesus Christ. When his efforts failed, Equiano provides an example of proper lament but also enduring trust in God, knowing that it is ultimately up to the Great Shepherd to gather his sheep.

As a final note, Equiano did the universal church a profound service by recording his life, including this failed evangelism attempt. Thanks to this decision, hundreds of years later, we might appreciate, learn from, and celebrate all that is contained in this work and the life it presented.

I hope and pray that after your reading of this brief scene, you will consider taking up The Interesting Narrative, seek to learn about and appreciate the amazing life of Olaudah Equiano, and prayerfully follow his example of boldly sharing the good news of Jesus Christ.

Christian Clement-Schlimm is a PhD Student at Wycliffe College, University of Toronto. His research focus is the eschatological and missiological thought of nineteenth-century evangelical Anglicans. He also serves as an elder at Grace Baptist Church of Richmond Hill.

2 Why Did God Reject Cain’s Offering?

3 What Did Jesus Mean When He Said to Store Up Treasures in Heaven?

4 The Benefits of Being the Old Guy

The Book of Revelation is like an art gallery filled with pictures painted in colours borrowed from Old Testament canvases. If you want to understand “the Whore Of Babylon” you...

3 Things Biblical Humility Is (And Isn’t)

The Fall Of Babylon – Old Testament and New

To the Leader who is Gripping sin Deeply

10 Things You Should Know about the Great Apostasy

Episode 44: Worship During The Week