Near the start of my life as a Christian, I developed a habit around both Christmas and Easter—traditional times when key verities of the Christian Faith are recalled (the incarnation of the Lord Jesus and his atoning death and triumphant resurrection)—of reading a classic work that dovetails with those verities. Over the years, I have read and re-read, for example, Athanasius’ On the Incarnation of the Word at Christmastide. This year I have decided to read tomorrow a sermon by the French Calvinist Jacques Saurin (1677–1730), “Pour le Dimanche avant Noël.” 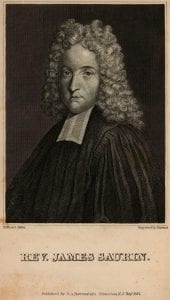 Now, I have had a longstanding fascination with the French Evangelical tradition, which was sparked and developed by an equally long association with Séminaire Baptiste Évangélique du Québec (SEMBEQ). It was during the course of the academic year 1984–1985 that I really first heard of SEMBEQ. I was teaching at Central Baptist Seminary, then located on Jonesville Avenue, near the intersection of Eglinton and Victoria Park in Toronto. One of our students that year was François Picard, later the President of SEMBEQ. One day, in our library, which was located on the third floor of the building, François asked me if I would be interested in teaching the occasional church history course at SEMBEQ.

I quickly agreed, despite my French being a little rusty. And the following summer I found myself being introduced by Jacques Alexanian, then-President of SEMBEQ, as the teacher of early Church History to a class of French Baptist brothers in their seminary building, then on Gouin Boulevard in west Montreal. Some friendships made that summer—especially with Dr Pierre Constant and David Cotnoir—have deepened and have been treasured over the years. That first summer in 1985 led to over thirty years of teaching at SEMBEQ (1985–2016), usually for one- or two-week modules, and fabulous friendships with a great number of French brothers, whose names are precious to me: André Constant, Stéphane Gagné, François Turcotte, Yanick Ethier, Donald Rodier, Sylvain Paradis, François Deschamps, René Frey, Samuel Coppieters, Richard Houle, Michel Habib, and, of course, Monsieur Alexanian, who became, in many ways, a mentor to me. Staying in their homes and worshipping in their churches, filled with French vitality and joy, was thrilling, for so many in their congregations were first-generation believers.

One of the things I soon realized as I taught church history in Quebec was the necessity of teaching these brothers and sisters about their “patrimoine spiritual”—that fabulous French evangelical tradition that goes back through men and women like Ruben Saillens, Adolphe Monod, and Henriette Feller, and Jean Claude and Jacques Saurin, and Antoine Court and Pierre Du Moulin to Jean Morély, Jean Calvin, Renée de France, Guillaume Farel and Jacques Lefèvre d’Étaples. What an “héritage” our French brothers and sisters have, and need to know.

Of course, I had to learn it, since this French tradition had not been part of my own Anglophone training. And so it was I came across Saurin. My own Baptist forebears, men like Robert Robinson, had valued his sermons. But I first learned of him through my time in Quebec. I am so deeply thankful to God for those many weeks and weekends he gave me at SEMBEQ and the dear friends in the Association of Baptist churches there. They deeply impacted my life and, I trust, changed it for the better!