What makes the Christian worldview on life and sexuality defensible in our secular age? Is it possible to demonstrate in any compelling way that the Bible’s teaching on the value and dignity of human life, gender, marriage, and family actually lead to the greatest human flourishing?

In Love thy Body, apologetics professor Nancy Pearcey provides immense help in the task of understanding the philosophical and historical underpinnings of secular thought that inform current views on abortion, euthanasia, hookup culture, homosexuality, transgenderism, and the family. With intellectual precision, Pearcey demonstrates over and over how the secular view of human life and flourishing is contrary to nature itself and does not deliver on its promise to value life or promote well-being. In apt juxtaposition, Pearcey builds a case for why the Christian worldview, not secular philosophy, consistently leads to human flourishing.

Pearcey begins her analysis of these topics by explaining the dualism of modern philosophy, in which facts and values are pitted against one another: facts (usually rooted in science) are given primacy over values (usually rooted in morality). Throughout the remainder of her book, Pearcey systematically demonstrates how this two-story view of body (fact) versus person (value) permeates secular thought and demeans rather than liberates us. 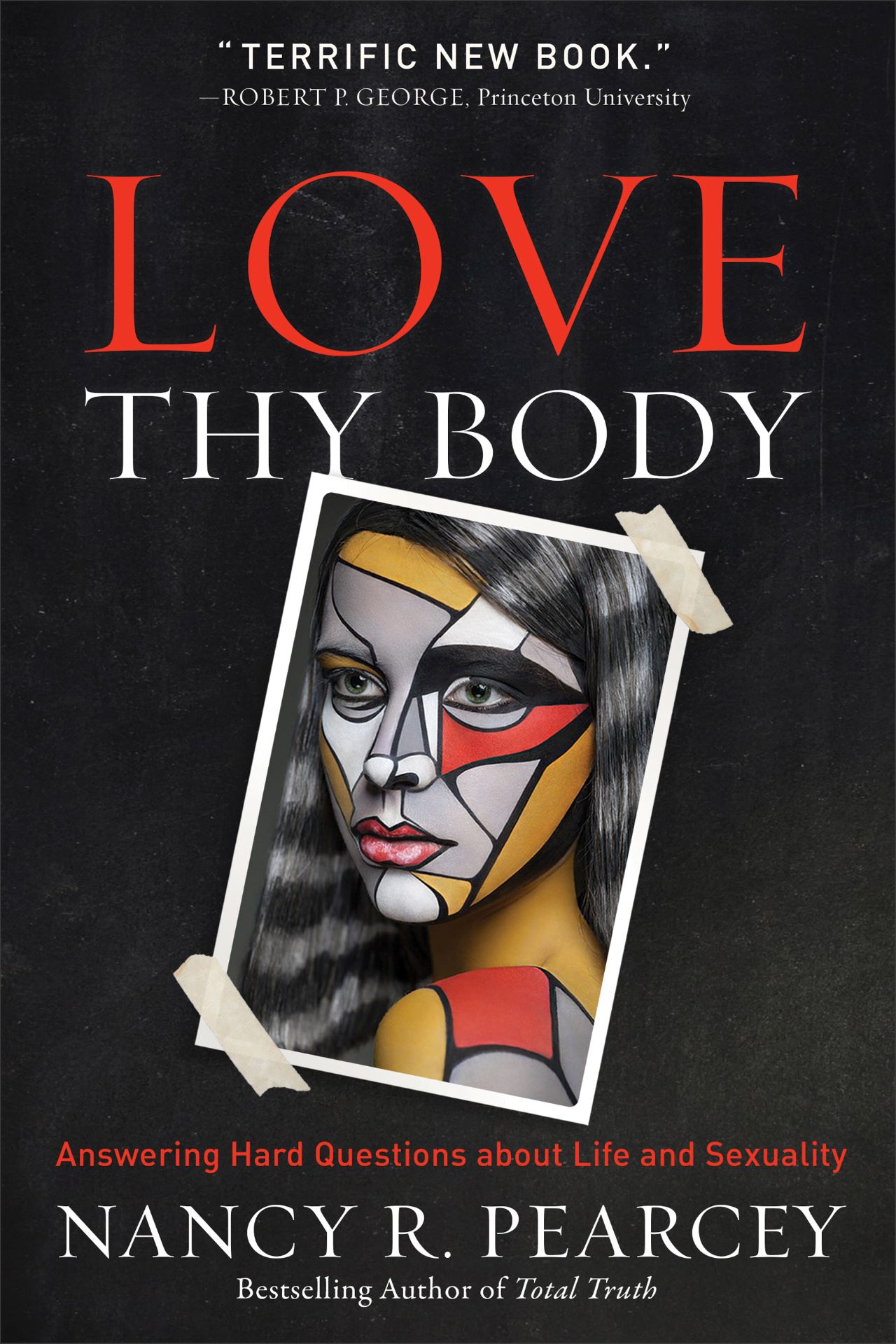 Love Thy Body: Answering Hard Questions About Life and Sexuality

Love Thy Body: Answering Hard Questions About Life and Sexuality

Throughout Pearcey’s survey of these issues of life and sexuality, one thing is clear: the secular worldview, while claiming liberty for all and freedom of expression, actually promotes self-hatred, as it repeatedly denigrates the meaning and value of our physical existence. It requires its adherents to disregard the physical reality of their bodies and serve the tyrannical and ever-changing whims of internal desires, a practice that over-promises freedom and joy and under-delivers on both.

The Value of Life

Abortion is the first issue that Pearcey explores. She describes the arbitrary nature of secular arguments for personhood, which defy biological reality: even biochemists agree that an embryo is biologically human at conception, she notes. Arguments for abortion are instead grounded in a subjective understanding of personhood in which human value rests in the ephemeral consciousness of the mind. This, Pearcey argues, demonstrates the secular worldview’s devaluation of the body, which declares to the unborn: “All life is not equal” (63).

A more natural, pro-human position, Pearcey posits, is one grounded in Christian theology. Among all worldviews and religions, Christianity alone presents body and spirit as unified and equally valuable—a reality God himself demonstrated when he sent Jesus, who was born into a human body, killed in that body, and will reign forever in bodily form. Pearcey completes this chapter of her book with helpful exhortations to Christians to live in ways that value all life and support those who have unwanted pregnancies.

Pearcey demonstrates a similar dualism in the secular worldview regarding euthanasia, in which the autonomous, conscious mind is valued and the physical body is denigrated. According to this worldview, human life is expendable, particularly when mental capacities are limited. The result, Pearcey argues, is an erosion of human rights and those with the greatest power determine who is allowed to live.

In contrast, the Bible establishes that human worth is based on physical life itself, not a person’s ability to think, act, or contribute to society. Pearcey highlights how the Christian worldview alone provides help and hope to individuals who would consider euthanasia, as it gives categories to help suffering individuals understand their suffering and also offers a promise of future restoration.

The Value of Sexuality

Next, Pearcey dives into the sexual ethics topics of hookup culture, homosexuality, and transgenderism. In all three categories, she demonstrates how the secular worldview that advocates for sexual liberty and freedom does so by devaluing the body.

Hookup culture, she says, depends on a dualistic view of life when it argues that a person can use his or her body sexually in a way that does not affect the mind, emotions, or inner person—the body is reduced to a tool to be used for pleasure. Pearcey points out that this depersonalized view of sex defies reality however, as biochemical triggers and bonds occur within the inner person during sex.

The result, Pearcey argues, is a culture ridden with dysfunctional relationships and depression because people are unable to live in a way where the outer and inner person are definitively separate. In contrast, Pearcey highlights that a biblical view of sexuality promotes human flourishing as it places sex within a committed relationship where both body and soul are desired and cherished as a unified whole.

If hookup culture seeks to ignore the inner person as it celebrates liberal sexual expression, the worldview that promotes homosexuality and transgenderism does the opposite: the biological facts of a person’s sex are seen as irrelevant and the inner thoughts, feelings, and desires are the only matter of importance.

Pearcey again exposes how this division defies experiential reality. She argues that despite great efforts to contrive human flourishing by prioritizing subjective feelings over objective biology, these efforts “deny the goodness of creation and the teleology of the body” (157).

The result, she argues, is not the sense of wholeness and fulfillment that is promised. Instead, when sexual desire is understood as the core of personal identity, it imprisons, not liberates. Pearcey observes that this worldview is “ancient Gnosticism in new garb,” where “the physical body is not part of the authentic self…the authentic self is only the autonomous choosing self (196).” Is this self-determining identity freeing? The answer, from the lips of a gender nonconforming individual she interviewed, is a resounding “no” (225).

By contrast, Pearcy reminds the reader that the Bible tells us who we are. It teaches that our biological genders are significant and that neither homosexual nor heterosexual desires need to enslave us because with God’s help, they can be guided and changed. In summary, Pearcey says that the Bible uniquely calls people to live as unified beings where the body is meaningful and provides a grid for self-interpretation; it is not an irrelevant organic mass that impedes one’s search for identity.

The Value of Family

The secular trend, Pearcey notes, is in favour of fulfilling individual desires and away from fulfilling natural obligations of creating and caring for biological children, or nurturing ailing family members. The perceived constraints of natural relationships are traded for the freedoms of autonomous choice and while promising common good, the result is greater fragmentation and dependence upon the state to define our relationships and responsibilities to one another.

Pearcey observes that the body, in its natural state of interdependence, is disdained yet again. Only the Christian worldview teaches that the body has meaning and value, that relational dependence is good (and even reflective of the Godhead), and that sacrificial service to others, not autonomous independence, is the pathway to human flourishing.

Why You Should Read This Book

Throughout Pearcey’s survey of these issues of life and sexuality, one thing is clear: the secular worldview, while claiming liberty for all and freedom of expression, actually promotes self-hatred, as it repeatedly denigrates the meaning and value of our physical existence. It requires its adherents to disregard the physical reality of their bodies and serve the tyrannical and ever-changing whims of internal desires, a practice that over-promises freedom and joy and under-delivers on both.

Through careful research, explanation of philosophical roots and historical forces, Pearcey exposes the weaknesses of secular thought and lifts up the principles of God’s Word as the only source of truth that leads to human flourishing, where body and soul are valued, unified, and freed up to fulfill their ultimate purposes.

Courtney Vera is a biblical counselor and Canadian expat who lives in Beaumont, California with her husband and two daughters.