Ronald E. Heine has skillfully translated Origen’s Commentary on Matthew into English. In his translation, he has refrained from over-filling the work with footnotes—economically citing clarifications or cross references when he deems it necessary. His introduction only takes 31 pages, which leaves over 700 pages of Origen’s words to fill up the pages of this two-volume edition.

That may not sound entirely unique, yet often translations or editions of ancient works have introductions along with notes that threaten to overwhelm the ancient author’s words. This does not happen here. It is Origen’s Commentary on Matthew—not Heine’s academic treatise about Origen.

With only minor caveats, students, Christian leaders, and academics should ask their library to purchase this volume or wait for OUP to release an affordable softcover edition. It is an excellent work overall that should be in the hands of anyone interested in church history, patristics, or even the Gospel of Matthew itself. 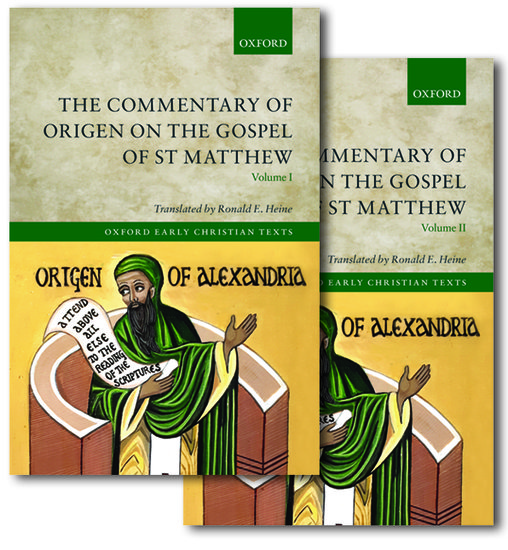 The Commentary of Origen on the Gospel of St Matthew

The Commentary of Origen on the Gospel of St Matthew

In short, the Commentary presents a measured and reflective Origen. For example, in his Romans commentary written sometime in the middle of his career, he pleaded a certain openness to the sense of the word eternal (CommRom 6.5.9). An implication being that eternal punishment could merely refer to our current life or a certain age or so on. All of this accords with the possible meaning of the word eternal in Greek. At the same time, theologically his explanation left open the possibility that hell was not an endless state.

Things change in his comments in Matthew. He contrasts eternal punishment with temporal punishment, citing the difference between unending duration and a short duration. The point here for Origen is that eternal punishment has no end because it represents an invisible reality as opposed to our temporal and visible state that we now live in (Series 72).

More could be said here since elsewhere Origen hopes for the salvation of all people, and perhaps the Latin translator made him seem more orthodox than Origen actually was. Yet Origen’s translation generally seems reliable if not perfect. Whatever we conclude, the key point to realize is that Origen’s Commentary on Matthew represents his mature thinking in which he revisits and rethinks through prior doctrine.

A recent discovery of Origen’s commentary on Psalm 77 has opened up new insight into Origen’s understanding of Matthew. Since we do not have access to most of Origen’s comments on Matthew 1–12 (these works being lost), we do not have his introduction to Matthew. Yet Origen provides something of an introduction in his commentary on Psalm 77 (Ps 78 in English).

Matthew explains why Jesus spoke in parables by citing this psalm: “All these things Jesus said to the crowds in parables; indeed, he said nothing to them without a parable. This was to fulfill what was spoken by the prophet: ‘I will open my mouth in parables; I will utter what has been hidden since the foundation of the world’” (Matt 13:34–35). For Origen, Matthew cites Psalm 77 as a psalm that prophetically records Jesus’s voice (only the first two verses; 21).

This leads Origen to see Psalm 77 as fulfilled in the parables of Jesus. More specifically, since Psalm 77:1 (Eng 78:1) calls for obedience to the law before discussing parables in verse 2, Origen finds it determinative that people should first grasp the ethical teachings of Christ before his theological or mystical instruction—the reverse order of which is the cause of heresy (23). The sequence of Matthew bears this out as Jesus gives the law in Matthew 5–7 before relaying the mysteries of the kingdom through parables (23–24).

This may correlate to another key to understanding Matthew, namely, the relationship between Jesus’s explanation to the disciples in private and his public teaching in parables (7–13). Both groups follow Jesus—but at entirely different levels of commitment and understanding. This hierarchy of discipleship was not merely theoretical for Origen as he preached daily to his congregation, and he knew that much of his flock only attended on feast days and lived unrighteous lives (10).

Origen thus recognized a twofold commitment of Christians in his care, and he worked earnestly to bring everyone into the upper tier of discipleship. Possibly, Origen’s high-minded and admittingly elitist sounding language aimed to persuade his congregation to fully commit to the faith and not remain outside the inner-circle—hearing the parables of Jesus but not the explanation of the mysteries like Jesus’s disciples did in Matthew.

By reading Matthew and the life of his church so closely together we also glimpse part of the heart of Origen’s exegetical process. He was a man of the church who read Scripture for his local church. In an earlier work on Origen, Heine explains:

The Commentary on Matthew is no different. The work constantly returns to practical matters of Origen’s local church as well as issues affecting the churches across the world such as the attack of Marcion (c. 85–160 AD) and Gnostics on the faith.

For the most part, this arrangement works well since the commentary does not usually deal with technical theological discussions that require original language access to properly evaluate. Still, there some places would have benefited from at a least footnote indicating the underlying Greek or Latin term such as when Origen says the Father possesses the Son as Power (Catena 242).

Heine’s translation is readable and accessible, making this volume a success since it can reach a wide audience. A key weakness, it should be noted, is that the hardcover edition of the Commentary is priced for libraries and not for individuals. Yet OUP sometimes releases affordable softcover editions of its works. For students, pastors, and scholars without access to the work at their library, this will be the best option.

Yet if one has access to a theological library, request that your library purchase it. It is well worth it, especially if one wants to understand Origen’s mature thinking and often insightful comments on the Gospel according to Matthew.

OUP provided a review copy of this work. As an Amazon Associate, TGCC earns from qualifying purchases.

Wyatt Graham (PhD., Southern Baptist Theological Seminary) serves as the Executive Director of TGC Canada. You can follow him on Twitter at @wagraham.