Peter Leithart has written a commentary that specifically aims to uncover the theological meaning of Revelation. While most commentaries do speak on theological matters, they do not always focus on theology. Some highlight pastoral issues; others emphasize social and historical matters; still others work hard to comment on the grammar and syntax of a biblical book; still more concentrate on biblical-theological relationships between Revelation and the Old Testament. Few specifically focus on theology. Leithart’s commentary comes as a welcome contribution to the commentary literature on Revelation.

Leithart’s theological emphasis means that he generally focuses on the narrative-structure and narrative-meaning of Revelation. He rarely—if at all—discusses Greek grammar and syntax, although he works from the Greek New Testament, and the Greek text of Revelation appears throughout the commentary. Consequently, while readers need not know Greek, they will benefit if they do know the language. Alternatively, those who understand little or no Greek may consider purchasing a language focused commentary to make up this gap of knowledge.

Much theological interpretation today writes to the pulse of retrieval theology. And while Leithart certainly looks to the Christian past to retrieve theology (he frequently cites early Christian sources), he does not easily fit into the retrieval movement because he follows the theological mode of Revelation itself (poetic theology) and even questions certain classical Christian norms like immutability (2:442). 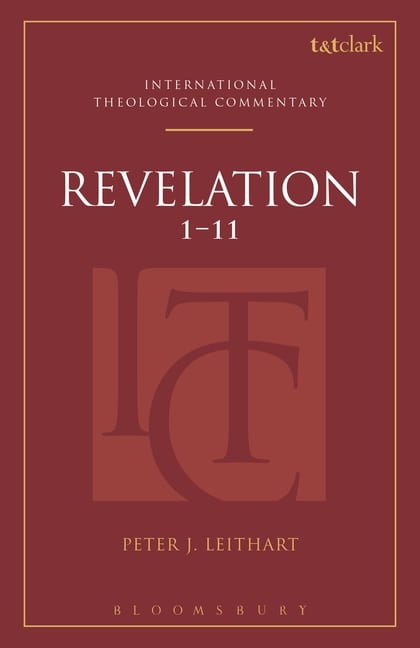 Peter Leithart has written a commentary that specifically aims to uncover the theological meaning of Revelation. While most commentaries do speak on theological matters, they do not always focus on theology. Some highlight pastoral issues; others emphasize social and historical matters; still others work hard to comment on the grammar and syntax of a biblical book; still more concentrate on biblical-theological relationships between Revelation and the Old Testament. Few specifically focus on theology. Leithart’s commentary comes as a welcome contribution to the commentary literature on Revelation.

The theological mode that Leithart engages seems akin to the biblical-theological approach because he traces not only the meaning of Revelation but its own theological pattern. Put simply, he retells the narrative that Revelation tells. He works chapter by chapter showing how Revelation tells a coherent, historical, and sequential story. By historical, I mean he interprets the symbols in the book of Revelation according to the literal sense while identifying the symbolic language with historical events and people. The 144,000 are Jewish believers. The numbers in Revelation means something in actual history. And so on.

What Is the Book of Revelation?

Leithart defines Revelation as “a book of poetic prophecy, which describes historical events mostly under the cover of evocative archetypal symbols.” He continues, “Along with the rest of Scripture, Revelation indicates that theology is a study of history and of God’s activity in history” (2:440).

This theological-historical reading leads Leithart to conclude that Revelation primarily is about events that occur shortly after the letter was written. But his preterist impulse neither leads him to conclude that all events in the book are in the past (i.e., Rev 20:11–21:8 speaks of the far future) nor that Revelation does not speak directly to future generations. Instead, Leithart calls his approach a typological preterist approach and invokes God’s consistent working in history as revealing a system of patterns that we can expect God will replicate in the future (1:14). If God saved Israel in an Exodus, he will do the same in the future. And he did so through Christ, and he did so again through the martyrdom of the saints in Revelation according to Leithart.

How Does Leithart Read the Book of Revelation?

This is where it gets interesting. Leithart takes the four horsemen of the apocalypse to represent the apostolic church (1:271, 1:274). And chapters 6–11 generally portray the earliest apostolic church and its victory, while chapters 12 and forward describe what will happen in a short time, namely, that Christ will observe Jewish and Gentile Christians following his cross-centred path of martyrdom. Their deaths function as a redemptive-historical marker completing the work of Christ by showing that his body too will in his footsteps. Further, the martyrs then replace the 24 elders (or ancient ones) and so judge the world.

From Leithart’s perspective, the only far future passage in Revelation is Revelation 20:11–21:8. Thus, the new Jerusalem replaces the old Jerusalem which was sacked in AD 70. Leithart writes of the New Jerusalem, “It is the city that Christians now inhabit, the church of the millennial age” (2:439).

Anyone committed to interpreting passages like “And a third of the earth was burned up, and a third of the trees were burned up, and all green grass was burned up” (Rev 8:7) to refer to a distant future event will not be persuaded by Leithart. In response, Leithart would probably argue that the word “earth” (γῆ) can just as easily mean “land,” that is, the land of Israel (1:361). And the violent language would describe the martyrdom of early Christians (1:361).

Put more simply, a dispensationalist may not feel compelled to accept Leithart’s interpretation because for a dispensationalist “a third of the earth/land” must refer to a future event; after all, they’ve never seen a third of the earth burned up before. Such a wooden reading of the richly symbolic language of Revelation, however, fails to appreciate what symbols signify.

For example, only a few verses later John relates, “I saw a star fallen from heaven to earth [τὴν γῆν], and he was given the key to the shaft of the bottomless pit” (Rev 9:1). After Jesus (Rev 1:18) gives the star a key, the star “opened the shaft of the bottomless pit” (Rev 9:2). Is it a literal star? Likely not because any star would instantly destroy the earth, and stars do not typically take keys from people.

So the star likely signifies a heavenly power that Jesus uses to open the pit (i.e., the underworld), which allows the locusts who sting like scorpions to rise and attack the saints. These locusts again cannot be woodenly interpreted to be locusts with scorpion tails! Instead, the passage draws on the imagery of judgment from the Old Testament to make a point: Jesus gives them five months to wreak havoc (Rev 9:10). Woodenly reading the text of Revelation thus vitiates the literal sense rather than upholds it.

Pointedly, to read the book of Revelation according to its literal intent means understanding symbols to signify what is signified. A star likely signifies a heavenly being. The key opens the door to Death and Hades (Rev 1:18). The locusts are satanic persecutors of the saints. Their description signifies the damage they can do; that is the thing signified.

What Must Be True for Leithart to Be Right

But this still does not answer the question of whether or not Leithart’s reading make sense of the Book of Revelation. A number of pieces need to come together. The first of which is that John must have written before AD 70—an opinion that goes against ancient testimony. Secondly, the word γῆ needs to mean “land” not “earth.” Finally, the Old Testament must portray the nations as God’s appointed means to protect Jerusalem, forming the oikoumene—the inhabited world that comprises the nations with Jerusalem at the centre.

The first two items have sufficient evidence to at least warrant their belief. The third item requires further explanation. Based on a reading of Daniel, Leithart sees exilic Israel as reliant upon Babylon, Persia, Greece, and Rome for support and protection (1:33). These nations or the rulers of these nations form “God’s world system” (1:33). In the New Testament Leithart asserts that the term oikoumene (“inhabited earth”) “refers to the imperial system that Yahweh establishes during Israel’s Babylonian exile, a world system that, for the Bible centers in Jerusalem” (1:33; see Luke 2:1; Acts 11:28; 17:6; 24:5).

On this basis, Leithart can claim, “the fall of Jerusalem was the collapse of this entire world-system” (1:34). The Roman sack of Jerusalem ended this world-system in which the empires protected the city. It was the “great tribulation” that Jesus spoke of in the Olivet Discourse according to Leithart (1:34).

If Leithart’s interpretation of the oikoumene is granted, then his reading of Revelation becomes much more plausible. The earth-shattering imagery and the elevation of the saints to rule and reign follow from an epochal transition from the empires that protected Jerusalem to the saints who reign. It is a new world-order, inaugurated by Christ and perfected by the blood of martyrs whose death in the tribulation effect this epochal transition.

Readers will have to judge whether or not Leithart’s proposal makes sense of the biblical material. For my part, I find it basically convincing. Nevertheless, his arguments could easily fit into a historical premillennial or amillennial reading of Revelation. Dispensational premillennialist will also benefit from Leithart’s work but might find it less likely to integrate into their reading strategy of Revelation. So despite one’s eschatological framework, Leithart’s commentary will prove challenging and edifying.

Do I Recommend It?

Despite some unfounded comments, a number of suspect chiasms, and an eyebrow-raising interpretation of numbers, Leithart has written an immensely important work of theology. He has not just interpreted Revelation; he has contributed to the ongoing project of knowing God in Christ. And while he writes at an academic level, he looks to the pastoral implications. For him, all theology is pastoral. And readers will partially see that when they read Leithart’s commentary.

Now, for the bad news. The two-volume commentary costs both arms and both legs. So most will have to wait for a paperback version to purchase the commentary (if it comes). But pastors connected to a theology library, professors, or students should request that a library purchase these volumes.