Early reformed theology as a whole affirmed free choice. So did William Perkins (1558–1602). He can say, “In the will, the remnant of God’s image, is a free choice.” And such a statement would not alarm or contradict other reformed theologians. In fact, when Richard Muller outlines the thought of Perkins in Grace and Freedom, he spends a considerable amount of time situating Perkins along with the thinking of other reformed thinkers.

In this sense, Grace and Freedom studies William Perkins as a sort of anchor among many other reformed thinkers (e.g., Ursinus, Zanchi, Vermigli). The importance of Muller’s study then goes further than only outlining and articulating the views of William Perkins on grace and freedom; the book also gives a fair sense of how other early reformed (and Roman Catholic) thinkers understood how God’s grace and human freedom interacted. 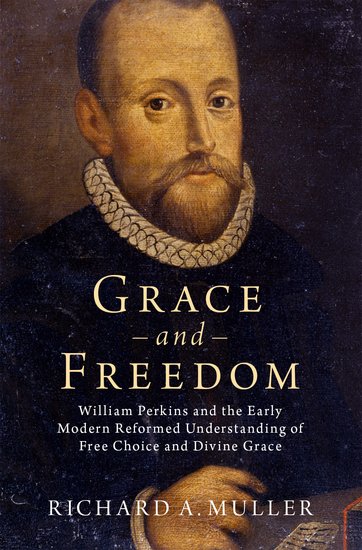 Early reformed theology as a whole affirmed free choice. So did William Perkins (1558–1602). He can say, “In the will, the remnant of God’s image, is a free choice.” And such a statement would not alarm or contradict other reformed theologians. In fact, when Richard Muller outlines the thought of Perkins in Grace and Freedom, he spends a considerable amount of time situating Perkins along with the thinking of other reformed thinkers.

In sum, William Perkins affirms free choice, although like others limits human freedom in various ways. The point here becomes somewhat obvious by way of illustration. A human being cannot fly. A person may desire to have a body with wings, but that person cannot fly apart from machinery. So humans cannot fly despite perhaps desiring it. People have limitations.

Most people think about unregenerate people when it comes to free will. In this case, according to Perkins, an unregenerate person still retains the powers or capacities to think (intellect) and to choose (will). They remain. The fall of man does not damage the substance of a human being but deprives the powers of a human, namely, of will and intellect.

For this reason, while free choice remains, the constraints on human freedom follow from a deficient will and intellect. As Perkins explains, “though libertie of nature remaine, yet libertie of grace, that is, libertie to will well is lost, extinguished, abolished by the fall of Adam.” In other words, we have the liberty (freedom) that belongs to nature—we can choose blue instead of grey. Yet the liberty to will well no longer remains in man.

That is to say, while humans can freely choose, they do so under the limitations of a deficient will and intellect that results in their inability to will well. One might then wonder how someone might choose to believe in Christ for salvation, if one cannot will well?

The answer involves both the retention of free choice and a particular distinction regarding the order of nature and the order of time. For Perkins—a supralapsarian—the human will concurs with God’s grace at the moment of conversion. No time separates the act (i.e., the order of time here is not necessarily in question); the order of nature, however, does come to play a role since God’s decree exists as the ultimate cause of everything.

Nonetheless, such a decree does not remove freedom of choice. Rather, it establishes it. And even in conversion, free will still plays a vital role. Perkins asserts: “in the first conversion of a sinner, mans free will concurres with Gods grace, as a fellow or coworker of some sort.” He also notes, “When any man is converted, this worke of God is not done by compulsion, but he is converted willingly: and at the very same time when he is converted, by God’s grace hee wills his conversion.”

The particular concurrence here then affirms both the free choice involved in conversion that concurs with God’s grace. In particular, outside of the order of time, “by God’s grace” a person wills conversion.

In his earlier work Divine Will And Human Choice, Richard Muller has spelled out the notion of concurrence in detail. In Grace and Freedom, however, Muller (possibly because of the genre) seems to make the ideas of concurrence easier to grasp—an admittedly subjective appraisal. Which means that more readers could benefit from the tome.

As one might expect, Muller’s scholarship here draws deep on the well of early reformed writers. The constant reference and citation along with critical commentary on the sources in Grace and Freedom contribute to the work’s success. While a reader may disagree here or there with a particular argument, the sheer preponderance of specific citation and sharp definition makes it hard to gainsay the argument of Muller.

Muller engages some contemporary writers (e.g., Paul Helm), although the work focuses on exposition. These engagements fit into the greater exposition of reformed thought, and they serve to situate the work among contemporary scholarship.

Do I recommend the work? Definitely.

Libraries should buy it. Researchers should read it. Pastors who need to speak carefully about the topic of human freedom and God’s grace should consider investing in it. Students ought to read it to avoid making infelicitous claims about human freedom.

OUP provided us with a review copy. As an Amazon associate, TGCC earns from qualifying purchases.

Wyatt Graham (PhD., Southern Baptist Theological Seminary) serves as the Executive Director of TGC Canada. You can follow him on Twitter at @wagraham.

2 Self-promotion and the Kingdom of God

3 5 Surprising Things That the Bible Says about Sex

5 Why Did God Reject Cain’s Offering?

What the Bible Teaches about Divorce and Remarriage

What Did Jesus Mean When He Said to Store Up Treasures in Heaven?

Looking Back: 3 Lessons from My Deepest Valley

The Fall Of Babylon – Old Testament and New