There is a feeling I get when I finish a truly special book. It is the sense that I’ve been granted a rare glimpse of something beautiful and good, a sense of gratitude and satisfaction, like when you come to the end of a great vacation. I don’t imagine I’m the only one. And this is exactly how I felt as I closed the back cover of book 4 in the Wingfeather Saga. I soaked in that quiet moment even as my shirt soaked up the tears that the final pages had elicited.

What is the Wingfeather Saga? It is a 4-book fantasy series written by acclaimed Christian singer-songwriter Andrew Peterson. The series was first published from 2008 to 2014, but with the release of illustrated hardcover editions in March 2020, they are receiving a well-deserved second wind of attention. When COVID-19 relegated all of us to our homes last March, Andrew Peterson began reading about 30 minutes per night via livestream. For my family and many others, it was a delightful discovery and it quickly became an evening ritual for the ensuing months. The official audiobooks have now been released, narrated by Andrew Peterson himself, complete with great character voices.

This review will unfold in three parts: a brief overview, a discussion of the books’ influences, and a hearty commendation. 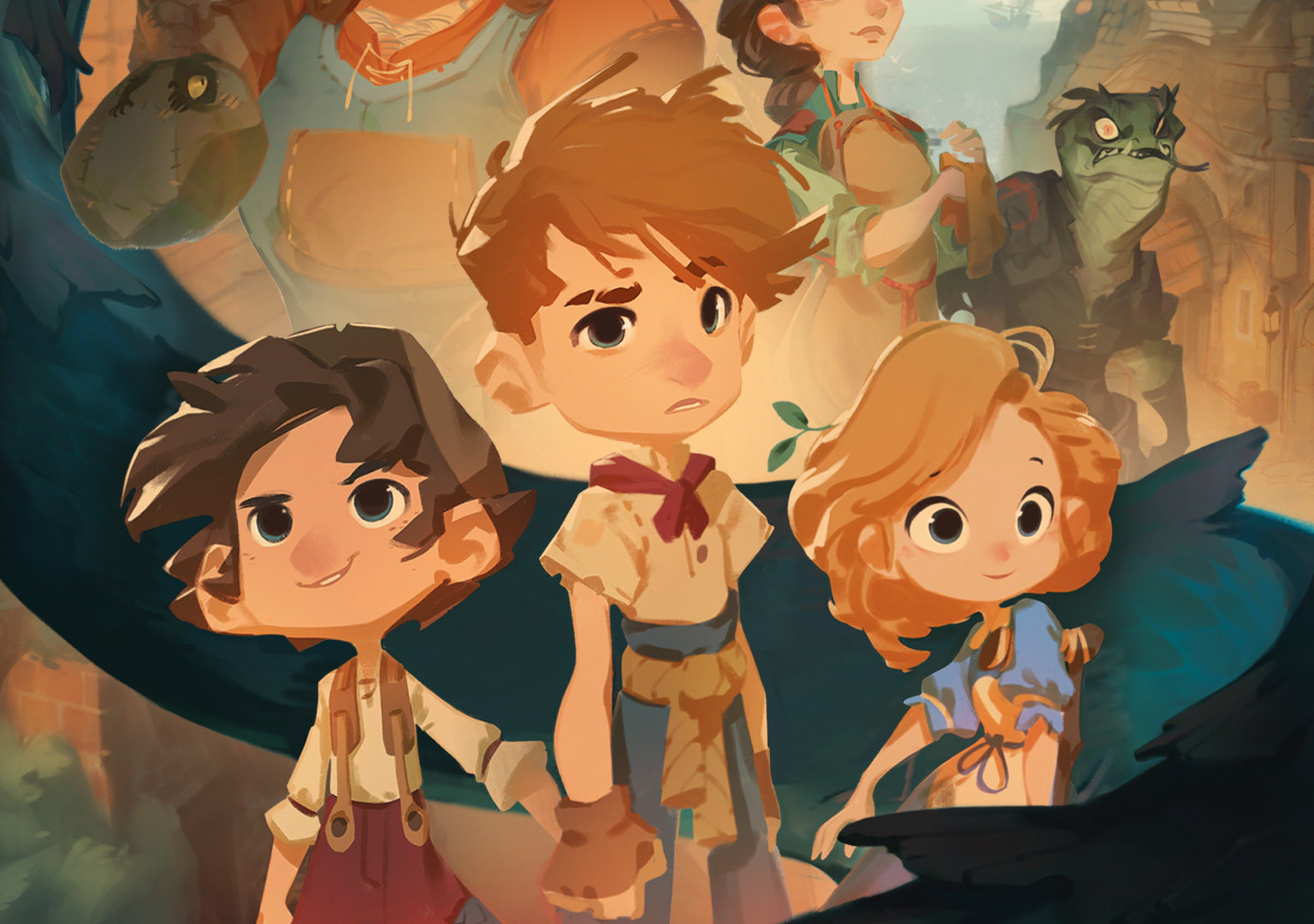 The Wingfeather Saga tells the story of the Igiby family and especially their three children: Janner, Kalmar, and Leeli. It takes place in the land of Aerwiar, nine years after a nameless evil named Gnag the Nameless has devastated all that is good and fair. And if that last sentence made you smile, prepare to laugh, because these moving and serious books are also seriously funny.

The Wingfeather Saga tells the story of the Igiby family and especially their three children: Janner, Kalmar, and Leeli. It takes place in the land of Aerwiar, nine years after a nameless evil named Gnag the Nameless has devastated all that is good and fair. And if that last sentence made you smile, prepare to laugh, because these moving and serious books are also seriously funny.

Peterson describes the genesis of the Wingfeather Saga as a story he first wrote for his own children. The first book is perhaps the most playful, with silly names and a narrative voice which is distantly reminiscent of Monty Python. As the stakes rise throughout the series and the characters face ever greater evil and peril, the prose settles into a more sober tone. That is partly because Peterson chooses to deal with some very dark themes, unusual in books aimed at children.[i] But this also gives the books their unusual depth. Darkness and evil are presented not only as external threats, but also as internal realities at work in the hearts of the characters. And those struggles are described in a gritty realism that comes only from personal experience and rare honesty.

Over the course of the four books, many themes are touched on with remarkable insight: family, friendship, loss, suffering, failure, forgiveness, and more. The fourth book, by far the longest, reveals Peterson at his creative best. The tensions are ratcheted up and up until a final resolution is reached. The defeat of evil, however, is not the end. A great symbolic act of healing actually serves as the thematic climax of the series. (I am being quite vague in my descriptions to avoid having to warn you about spoilers!). For those who know and love the redemptive story of the Bible, the resonance is deep.

The well-read Christian will recognize the major influences. J.R.R. Tolkien and C.S. Lewis loom large. It seems to me that Peterson adapts elements from both Tolkien and Lewis, although the world of Aerwiar is clearly more like Tolkiens’ Middle-Earth than Narnia. For example, Aerwiar (pronounced like “’ere we are” with a Cockney accent) has a long and detailed backstory that is referred to at many points along the way, and there are hints of a long future as well beyond the scope of the series. The world is detailed, earthy, and there are maps. The author manages to make the reader feel that he is really visiting another place; a place that is internally consistent, with a real history and a real future and real characters making real choices that we come to care deeply about.

The nature of divine involvement in the Wingfeather Saga charts a middle path between Middle-Earth and Narnia. There is a ‘Maker’ that the characters interact with (unlike Middle-Earth), but that Maker makes no appearance and all interactions with him happen ‘off-stage’ (unlike Narnia). In addition, the structure of the ending seems to be a classic and self-conscious case of what Tolkien called the eucatastrophe, a concept he coins and explores in his essay “On Fairy Stories.” And it works (because it’s true – but more on that later).

I was also struck by the power of music in the Wingfeather Saga. Leeli, a gifted musician, turns the tide of many battles with the power of the songs she plays on her whistle-harp. Given the fact that the author is best known as a songwriter and musician, this distinctive element cannot be accidental. Rather, we are glimpsing here some of the ways in which Peterson sees the arts working in the world. I look forward to reading his more recent book Adorning the Dark for a fuller treatment of these themes.

For all my admiration, I’m left with the question that lingered in my mind as I finished the books and mulled over just how good they were: Does Peterson rise to the level of his esteemed masters? Is the Wingfeather Saga worthy to be classed with the Lord of the Rings and the Narnia Chronicles? My answer is: Not quite. Now, you die-hard fans, before you attack me like the toothy cows of Aerwiar, hear me out.

I believe that the Wingfeather Saga is a momentous achievement and a nearly perfect homage to the genius of those works and authors that have clearly shaped both the author and the series. But, unlike Tolkien and Lewis, I don’t think Peterson was trying to do something new and ground-breaking. I believe he was trying to learn from them, imitate them, and produce something of lasting value that would be his unique contribution. And in that goal, he has more than succeeded. In my view, the Wingfeather Saga is a significant part of the small renaissance of fiction by Christians that we are enjoying in our day, including works by Marilynne Robinson, Leif Enger, N.D. Wilson, and others.

The wise parent knows that when they hand a book to their child, they are inviting the author to shape that child. In Surprised by Joy, C.S. Lewis touched on this when he wrote of his first encounter with the fiction of George MacDonald: “That night my imagination was, in a certain sense, baptized; the rest of me, not unnaturally, took longer.” As I watch my two older children now eagerly re-reading the books so soon after we finished listening to them as a family, I have no doubt that the story and characters are working to shape and mold their hearts and minds in ways they do not yet recognize. Fiction, for good or ill, is subtle in its shaping power.

At its best, good fiction, like good nutrition, provides multiple benefits. For example, it shores up our defenses against the deadening siren song of secularism. We know our secular age will try to convince our children that they are nothing but bags of protoplasm floating in a cold, chaotic universe. But such drivel will be less plausible to those who have known Goodness, Truth, and Beauty through books like the Wingfeather Saga.

Good fiction is also, well, true. That is, it faithfully represents the way the world is. In this case, we see that evil is real and devastating. Not only that, but we find evil at work inside of us that needs to be confronted by a goodness and power we ourselves do not possess. At times, the darkness and evil will seem not only ascendant but also inevitable and unstoppable. But we can trust that we have an Author who is good, and that “there is something stronger than the darkness.”[ii] Yes – good fiction is true and teaches us how to live more faithfully within God’s created world. This is also why, on every single page of the Wingfeather Saga’s website, you’ll find these words at the bottom: THE STORIES ARE TRUE.[iii] Indeed they are.

The Wingfeather Saga is a great gift to the church and the world, and one that we should treasure and enjoy. I can think of no better way to immerse the imaginations of our children with the truths and themes of the great redemption story of the gospel than to hand them these books, or better yet, sit with them and read together.

[i] “Sometimes it is necessary to paint the sky black in order to show how beautiful is the prick of light.” Andrew Peterson in ‘A Note to Parents’. http://www.wingfeathersaga.com/a-note-to-parents

[ii] Andrew Peterson, reflecting on the themes of the Wingfeather Saga in a fascinating interview with Jake Meador: https://mereorthodoxy.com/wingfeather-saga-interview/

Phil Cotnoir is a husband, a father of four, an avid reader, and a freelance writer and editor. He graduated from Heritage College & Seminary (B.Th) and has served as an elder in his local church near Montreal. His day job is in the world of industrial automation and he blogs at www.philcotnoir.com.

3 What Does it Mean to Believe in God?

5 5 Surprising Things That the Bible Says about Marriage

Truth to Hold When God Delays

The story of Lazarus’ resurrection has an interesting beginning. Jesus hears Lazarus is sick and declares, “This sickness will not end in death but is for the glory of God, so that the Son of God may be glorified through it (Jn 11:4 CSB).” Then, Lazarus dies. When Jesus heard about Lazarus’ illness, he waited two days before leaving. On his way, Lazarus dies. You can hear the heartbreak as Lazarus’ sisters, Mary and Martha, both weep before Jesus. “Lord, if you had been here, my brother wouldn’t have died!” (Jn 11:21 & 32). Jesus could’ve saved their brother. Why...

In Praise of Small Churches

How to Take over the World in 300 Years

Why Did God Reject Cain’s Offering?

What the Bible Teaches about Divorce and Remarriage

Into Theology 48: Augustine’s Confessions — The Invisible God and the Origin of Evil